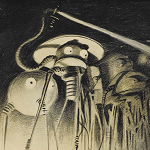 Kevin Chamberlain's statement on the status of the Arthur series:

My stance as an RMA fanEdit

As you might have guessed from the above poll, I am interested in the King Arthur series and the topics surrounding it. When RMA Studios' schedule has cleared up, I sincerely hope they'll have time to make the rest of the series available to the public and fans like me. But, considering their reluctance to publish the rest of Bored of the Rings, I have my doubts. I am also affronted by the censoring of older works, such as the privatization of the "Bored" series of videos. My purpose as an RMA Studios fan is to preserve the group's history and efforts, whatever the cost.

I'm now done with RMA. He has betrayed me and many other fan's sensibilities for far too long.

Retrieved from "https://stupidmariobros.fandom.com/wiki/User:Space_Hunter_M?oldid=31949"
Community content is available under CC-BY-SA unless otherwise noted.